Currently, the Boliden-owned mine deploys a fleet of 10 Caterpillar 795F diesel-electric hybrid trucks which haul up to 310-tons of rock from 400 meters (1,500 feet) beneath the surface, day in and in day out, at one of Europe’s biggest mines.

Yet personnel at the Gällivare mine, 100 km north of the outermost reach Arctic Circle, are one step ahead of the game, knowing the stakes are high. Efficiencies are a priority to balance budgets, and worker safety cannot be compromised. Carbon emissions, meanwhile, loom large on a warming planet.

Together, Boliden, Caterpillar, ABB and Eitech are thus piloting a clean tech initiative to unearth simultaneous scalability for electric-vehicle efficiency while systematically reducing Greenhouse Gas Emissions (GHGs). It is proving to be are markable ecosystem to nurture the United Nations-led Sustainable Development Goals (SDGs).

The trucks traffic 70 million tonnes of rock per year and, in 2017, enabled the shipment of 400,000 tonnes of concentrate, encompassing 97,500 tonnes of copper, 2.9 tonnes of gold and 62 silver tonnes. Though outfitted with hybrid diesel-electric batteries, each unit still engulfs 400 liters of fuel hourly, a consumption rate detrimental to the environment.

To address this challenge, Caterpillar, with ABB and Eitech, are pioneering a wire-based electrical conversion system that has the potential to disrupt the industry. Battery packs prove cumbersome among the extreme depths, trajectories and other equipment typical at mines around the world. 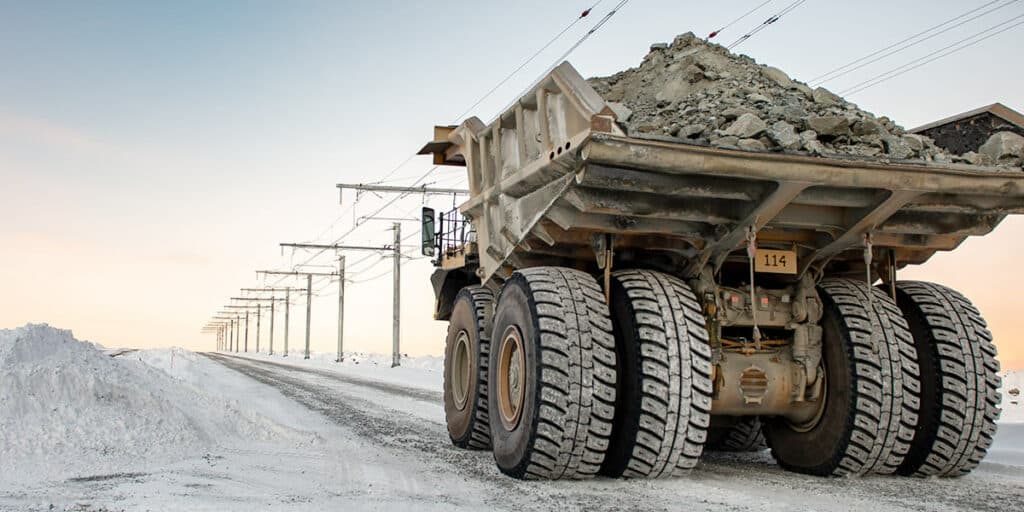 Initial testing of the truck’s overhead wiring will involve transporting non-ore rocks to elevations of 60 meters before expanding to greater heights. Careful and rigorous testing, followed by a gradual implementation of the devices, will be crucial given the often-relentless temperatures in one of Western Europe’s most remote spots.

Engineering firms ABB and Eitech, renowned for their expertise in electrified railway development, will also gradually integrate contact wire and transformer technologies into the mix.

Each truck will handle nearly 4.75 Mw (Megawatts) of power and allow speeds of up to 30 km hourly, double the 15 km hourly speed of the current diesel-electric units. After the trucks become operational, electricity will further accelerate GHG reductions up to 80 percent.

Caterpillar previously tested the truck wiring in the Arizona Desert, where it proved successful and used less power. The company also piloted related technology on smaller trucks in Africa.

Collectively, these deployments will further cement the Nordic nation’s expansive green footprint. Sweden is not only a global leader in fossil fuel divestment and clean tech—targeting net zero GHG emissions by 2045—but also soon will host one of Europe’s largest vehicle battery manufacturing plants in Skellefteå, 360 km south from Gällivare.

About Boliden AB
Boliden mines and processes base metals and precious metals, principally zinc, copper, lead, nickel, gold and silver. Headquartered in Stockholm, Boliden is also a leading global operator in the recycling of electronics and lead from batteries.

About Caterpillar and ABB
Caterpillar Inc. is the world’s largest construction equipment manufacturer and an American Fortune 100 giant that designs, develops, engineers, manufactures, markets and sells machinery, engines, financial products and insurance via a worldwide network. The firm is based on Deerfield, Illinois.

About the Copper Alliance®
The Copper Alliance® is a network of regional copper centers and their industry-leading members. It is responsible for guiding policy and strategy and for funding international initiatives and promotional activities. Headquartered in Washington, D.C., the organization has offices in four primary regions: Europe and Africa, Asia, Latin America and North America. Copper Alliance programs and initiatives are executed in more than 60 countries through its regional offices and country-level copper promotion centers.